Growing up, I didn’t have heroes.  I never really thought about it.  Maybe I didn’t like the idea of putting someone on a pedestal above me.  But as I age, I have more and more heroes:  First Responders, people of the armed forces, firemen, teachers, single parents…. all parents!  Really, the list goes on and on.  There are too many to count, but they all deserve to be counted.  Every one who spends their days doing good in the world.

Their are plenty of heroes in the Parkinson world.  Researchers, doctors, the volunteers, spouses, even the dreaded pharmaceutical companies.  And since the onset of the disease can be delayed through exercise, every one that wakes up and does battle through walking, tai chi, golf, etc, etc… Every one who chooses to fight every day, is a hero.

By far, the most famous hero in the Parkinson’s world is Michael J Fox.  Who knew the actor playing Alex P. Keaton in a sitcom called Family Ties in the 80s would turn out to be so important in my life.  Diagnosed with PD as a young man, instead of crawling into a ball of depression, he created the Fox Foundation whose goal every year is to fund research through donations to find a cure for the disease so the foundation is no longer necessary.  That’s right, everyone in the foundation wants to be unemployed. I can’t imagine a more noble goal.  Operating 100% on donations and 100% of the donations go to research for a cure.  Every time I meet with a representative of the foundation, I could not be more impressed.

On October 13th, the Foundation is having a fundraising 5K race affectionately called a Fox Trot.  I’ve participated every year and it’s a fun, hopeful, positive event.  This time, I have a team of racers call Green Machine. OK, we will be strolling.   And what can I say, but I am giving you an opportunity, through donation and/or participating in the race, to join the group of heroes and bring us closer to the day when there is no Parkinson’s Disease.  If you are unable to donate you resources, consider other ways by volunteering or even sending us a few thoughts of well wishing.  Having you on my side, aides me on my journey and helps me battle… every day.

Here’s the link to our group 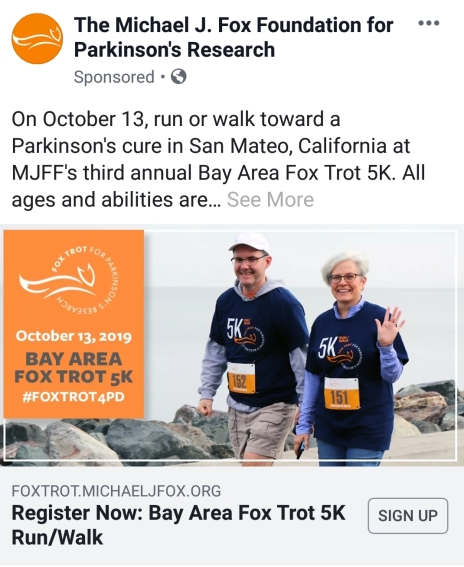